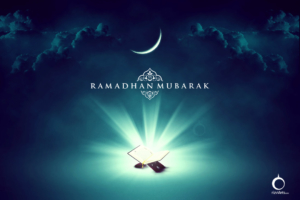 Ramadan, Arabic Ramaḍān, in Islam, the ninth month of the Muslim calendar and the holy month of fasting. It begins and ends with the appearance of the new moon.

Islamic tradition states that it was during Ramadan, on the “Night of Power” (Laylat al-Qadr)—commemorated on one of the last 10 nights of Ramadan, usually the 27th night—that G-d revealed to the Prophet Muhammad the Qurʾān, Islam’s holy book, “as a guidance for the people.” For Muslims Ramadan is a period of introspection, communal prayer (ṣalāt) in the mosque, and reading of the Qurʾān. G-d forgives the past sins of those who observe the holy month with fasting, prayer, and faithful intention.

Allah ﷻ says in the Qur’aan what may be interpreted as, “O’ you who believe, fasting is prescribed for you as it was prescribed for those before you so that you may achieve Taqwaa (righteousness, God-fearing).” [Surat Al-Baqarah, verse 183]

Prophet Muhammad ﷺ said, “Whoever observes the fast during the month of Ramadan, (while) believing in Allaah and seeking His rewards, will have his past sins forgiven.” [Reported by Imaams Bukhaari, Muslim and others]

Fasting the month of Ramadan is one of the main pillars of Islam. It is obligatory upon every sane, healthy Muslim whose reached puberty and is not traveling during the time of fasting. As for women, they must not fast if they are menstruating or having post-childbirth bleeding.

The Essential Elements Of The Fast

There are two essentials elements for your fast to be valid and accepted. They are:

Intention
You must have the intention to fast before fajr (dawn) every night during the month of Ramadan. The intention does not need to be spoken, because in reality it is an act of the heart, which does not involve the tongue. It will be fulfilled by one’s intention from the heart to fast out of obedience to Allah ﷻ seeking His pleasure.
Abstaining from acts that nullify the Fast
The second essential element for your fast to be accepted is that you abstain from the acts that nullify the fast from dawn to sunset.

If you maintain these two essential elements during fasting, then your fast will be valid and accepted.